There’s a pack of Tortas de Inés Rosales at Barney Greengrass’ shop window. Among bags of pretzels and boxes of crackers, the “delicious snack” from Seville finds its place in this charismatic centenarian establishment. Sure as it is of its own identity, Barney welcomes any foreign element that has something to add to the mix. Celebrating this peculiarity, Spanish writer Elvira Lindo, Upper West Side neighbor and Barney’s regular, has dedicated the store a beautiful passage of her new book, Lugares que no quiero compartir con nadie. Lindo also highlights the variety of fiction stories that have chosen this Jewish Deli Restaurant as a location. In my opinion, one of the funniest is the 30 Rock’s episode titled The Bubble, in which Liz Lemon has a lunch date at Barney’s with her new boyfriend, Dr. Drew Baird, a guy so handsome that everyone overlooks whatever shortcomings and extravagance he might have.


The store is divided in two areas. By the entrance, the deli shop, fifties polished chrome furniture and large counters, with piles of bagels, bialys, fruits, cans, pickles, cold and salted meat and fish to go. On the left side, the restaurant, wooden tables and chairs covered with dark green leatherette, and a mural on both sides of the wall depicting what it looks like New Orleans at the beginning of the 20th Century: once again, an out of place element that is, nevertheless, in perfect harmony.
Lucky me, we get the good-looking Zachary Levi meets Sacha Baron Cohen waiter, who explains that Barney Greengrass is the Sturgeon King, a fish so tasty that is also known as “the bacon of the ocean”. I chose to try one of the specialties, sturgeon scrambled with eggs and onions, and a poppy seed bagel with cream cheese: a sumptuous brunch, no doubt. “Spanish?” Gary Greengrass, the founder’s grandson throws a tailor- made joke for us, “Don’t you agree Gaudi’s works are very much like The Flintstones’ houses?”

We enjoy the place so much that we come back after a few days, at lunchtime. Next to our table, three men and one woman are having a lively conversation while they’re eating their matzo soup. Although they are discreet enough, it is obvious the males are fascinated by the petite, clean faced, straight haired brunette. The four of them are a contemporary painless version of Bashevis Singers’ The Cafeteria, that tale where a bunch of guys from the fifties, would smother with attentions and listen to the stories the delicate survivor Esther would tell in her idiomatic Yiddish, unaware of the deep disturbance behind her hazel – indefinite colored- eyes. 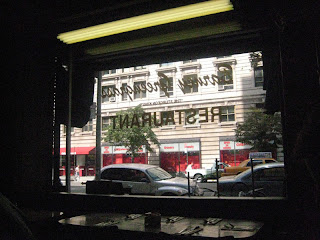